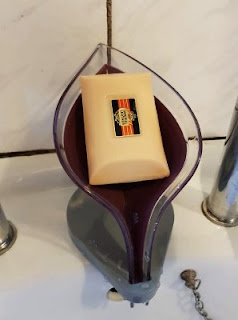 Having spent much of the night laying awake listening to the rain on the window I’d finally nodded off when the alarm went off. Over a bowl of the Tesco granola I’d bought yesterday (not bad) I watched another episode of Ricky Gervais’s “After Life” which was again rather good.
I had a little look at the Internet. There wasn’t much happening on Facebook really. Having joined the “Crap Animal Photography” page yesterday I left it this morning as there are only so many out-of-focus photographs you can look at before losing interest.
Seeing I had no emails at all I put some plant food onto my monkey puzzle tree and set off work-wards.

I drove to Pembury through a damp and dismal morning. The roads west-wards can be quite pretty in the morning sunshine, but were rather tedious in this morning's gloom.
As I drove the pundits on the radio were talking about the parlous state of our economy following the impact of coronageddon. I say "our" economy; from this morning's reports it is plain that the economy is clearly the property of an elite. There were reports of the HSBC bank wanting to lay off thousands of workers since their quarterly profits have plummeted to only three billion quid. And closer to home several ministers and MPs weren't interested in bailing out UK ferry and haulage firms who may well go bankrupt following the collapse of their businesses.
Am I the only one who sees something awry here? Years ago the government sold off the nation's assets because they didn't want the aggro of running them and felt that they would be more efficient in private hands. And now when these vital services are about to go belly-up, the government says it is not their problem. Surely the country needs an infrastructure in good times and bad? If nothing else, this pandemic has shown that a system of government which is dependent on greed falls flat on its face when there is no profit to be made.

I got to work. I did that which I could not avoid. There were a lot less cakes and Easter eggs than yesterday, which was a shame. But an early start made for an early finish, and I was home in time to go round the park with "er indoors TM" and the dogs.
The walk went well. Pogo didn’t shout *that* much and he played nicely with other dogs. Fudge did his usual trick of straggling and looking pitiful until he met another dog at which point he started a game of “rude-piggy-back” which totally made a mockery of my worrying about his bad back.

Once home I was amazed to see that "er indoors TM" had got us a new soap dish. It self-drains – how cool is that?
I then tried to pay for some Lego with PayPal. PayPal is crap. Whenever I use it I just get the “spinning blue wheel of death”. The only way to resolve it is to clear all the cookies and reset all the passwords. Which is something of a pain in the glass (as "Stormageddon - Bringer of Destruction TM" would say)
"er indoors TM" boiled up a particularly good bit of dinner which we washed down with some rather over-priced red wine, port and gin whilst watching yesterday’s “SAS: Who Dares Wins” and today’s “Celebrity Bake-Off”.
I expect I shall have a headache tomorrow…