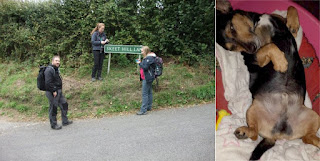 On one of the rare occasions that I managed more than a couple of hours sleep I was rudely woken far too early by a wet nose nuzzling into my left arm pit. Did I ever mention I never wanted a dog?

Over brekkie I watched an episode of “Dad’s Army”. The BBC broadcast an episode every Saturday evening; I had no idea there were so many episodes. They are all rather formulaic but they pass the time whilst I devour toast.
And then I had a look-see on-line and my piss boiled. There is a meme going about on social media in which people boast about how they have never used algebra since they have left school. What utter bollocks this is. There are only two reasons why this might be true. Either people are so thick that they cannot count, or they do not know what “algebra” is. If you go into a shop with a fiver and see the price of any object do you know whether you have enough money to buy it or not? If yes, then that is algebra in action.

I popped the lead onto my dog and we drove up to Crockenhill. Earlier in the week I’d had an invitation to go for a walk. Four of us (and "Furry Face TM") had a rather good walk The parakeets were rather noisy, and for some odd reason hundreds (if not thousands) of turnips had been dug up and just left laying on the fields.
As we so often do on these walks we hunted for errant Tupperware and escaped film pots as we went. Most of our quarry was easily tracked down but there was one particular geocache which proved troublesome. Having done a little puzzle to work out where to go we found ourselves looking at a thicket of brambles and stinging nettles. I ploughed in and after a few minutes discovered something large in the bush. I rummaged for a little longer before giving up. As Susan rummaged in my place I rechecked my sums. We were in the right place… or were we. I had a feeling we should be on the other side of the hedge. Not seeing any way to get to the other side I just pushed my way through. It took some pushing, and once there I decided I’d been on the right side after all. So I pushed my way back through the hedge ten yards further down the hedgerow (thinking what a good idea it had been to leave my dog on the right side of the hedge). As I stampeded through the undergrowth I discovered a second object buried under the brambles. Having narrowly avoided falling head-first through the thing I then discovered a concealed film pot lurking nearby. Result!!

I took a few photos as we walked. Once home I popped them on-line, then had a look at the settings of the astro club’s Facebook page. We’d had a whinge that it was felt insulting that someone should have to have their postings approved before their postings went live. Personally I’ve always felt that this is a good way to keep the unwanted spamming advert off of the page, but in order to keep the peace I’ve turned off the need for approval. I hope this is appreciated; I doubt I’ll find out directly as the complainant isn’t one who generally acknowledges my existence.

After a rather good bit of scoff "er indoors TM" set off to flog candles to the masses. I did have a vague idea to have an evening on the beer, but instead I sat in front of the telly and watched episodes of “Game of Thrones” – I’ve only just realised that one half of Robson and Jerome is in that show. It’s amazing what you miss when you are not paying attention…