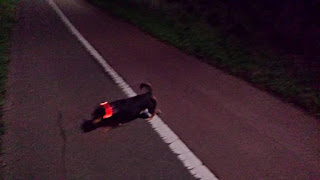 After the best night’s sleep all week I came downstairs to find my little dog fast asleep on the sofa. Perhaps he’s part of the cause of the insomnia?
Whilst he snored I scoffed my toast whilst watching more “Secret Diary of a Call Girl” then had a quick look-see on-line.
Last night I’d posted on the astro club’s website asking for volunteers to give talks to the club. I was rather disappointed this morning to see that out of a regular membership of well over fifty people I only had a single offer. Public speaking isn’t *that* hard. At the very least you might just read out a page from Wikipedia illustrated with what pictures you can find on Google images interspersed with a few knob jokes. After all that’s what I do.
If everyone had a go each person would only have to give a talk once every six or seven years.

It was rather cold as I set off to work. As I drove I listened to the radio. Great show was made of the by-election in David Cameron's ex-constituency of Witney where the Conservative majority has been slashed by twenty thousand. This was being touted as a staggering blow for the Tories -however it would seem that no one has made the obvious observation that the turn-out of voters was substantially down on what it was when Mr Cameron was elected. Less than half of the electorate of the constituency voted yesterday as opposed to over three quarters last time.
I've often remarked that democracy is a stupid idea. One of its failings is that given the choice of voting for what you want *or* of voting for the winner, a *lot* of people would rather vote for the winner (that way they feel their vote counts. Go figure!) This is clearly what has happened in Witney. People felt they had achieved something when they could boast that they'd voted for the Prime Minister whereas voting for "Joe No-one" doesn't carry the same kudos (with no insult intended to Robert Courts).

Meanwhile the current Prime Minister (on her one hundredth day in office) has pissed off the European Union  by telling then that Great Britain will continue to keep obstructing European decision making until we finally get round to doing a Brexit. I can't help but feel that the vote to leave has been taken; the UK should leave *now* before the rest of the EU tell us to f- off.

I'd left home rather later than planned and was surprised at how little traffic had been on the road. I got to work relatively quickly and did that which I couldn't avoid until it was time to come home.

Once home I was amazed to see "Furry Face TM" is learning a new trick. For the last few days I’ve refused to chase around after him as he barks in excitement prior to our walk. I’ve insisted he sits quietly to have his collar put on. This evening he was quivering and twitching but he managed to keep still to be collared.
I put on his illuminous collar because it was dark outside. The thing came undone three times.
We went for a walk via Pets at Home because we needed a new tuggy toy.

We came home to find "er indoors TM" had gone to unload candles onto the masses. I fed my dog then had a look at the monthly accounts. Whilst I am far from bankrupt, I am also far from as solvent as I would like to be. Is it *really* so much to ask to want to have far too much money?
I got myself some KFC, then watched the second of this week’s episodes of “Game of Thrones”. Odious King Joffrey got his come-uppance tonight. But like the character or loathe the character you have to admire the actor playing him.

My dog’s not playing with his new tuggy toy. That was six quid down the toilet…