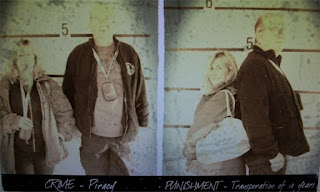 I’ve always wanted to sleep in a four-poster bed. Last night I did so; I have to say I don’t quite know what I was expecting from a four-poster but whatever it was that I was expecting, I was expecting more. I suppose I was somewhat disappointed to find that it was just a bed.
Having again seen pretty much every hour of the night I got up shortly before dawn and sat at our patio window watching the sun slowly come up over the mist on the Thames. As I drank my morning cuppa I could see where that underwater geocache was probably lurking. With "er indoors TM" fast asleep I toyed with the idea of nipping down to the river for a quick dip, but thought better of the idea.
Mind you as I looked out of the window I realised we had a balcony. I’ve always wanted a balcony. I could sit on it and flick peanuts at peasants as they walked by. This morning there was a marked absence of peasants.

We went down for brekkie. In a B&B the food is (usually) cooked to order. In a hotel it is mass catering. But having said that the brekkie was rather good.
As we scoffed I couldn’t help but watch our fellow guests. There is a coach load of pensioners staying in the hotel. For all that they find fault with everything, they are extremely over-familiar with everyone. I’m convinced there is something dodgy going on. The old boy who accosted me over the toast was definitely a swinger.
After brekkie I sat at our patio window and watched the swingers club getting on their coach. They were all rather touchy-feely with each other.

With the swingers safely off on their way to whatever sordid perversions they had planned (!) we drove into Oxford and used the park & ride to get to Oxford Castle. What would have normally cost us twenty-three quid actually cost us one pound fifty pence thank to the judicious use of Tesco ClubCard vouchers. Oxford Castle was actually rather good. The tour guide was fun; it probably helped only having five people in our party.

From the castle we made our way to the railway station. There was a virtual geocache there. Those things are *rare* so it would be daft not to have a look-see. There was also a geocache there billed as “terrain 5 difficulty 1“; easy to spot; almost impossible to actually get to. I found it easily.
That sounds cocky, doesn’t it.
Let me clarify that… I found it easily enough. I scrambled under a bridge (with "er indoors TM" expecting me to fall into the Thames) and spotted the cache immediately. However that was as far as I could go. The thing was magnetically stuck underneath the bridge. I could see it from fifteen yards away but couldn’t see how I could get it without having the use of a cruiser-boat and a ladder.

We had a swift dose of McDonalds for lunch and then drove out to Wallingford to see the castle. What a disappointment. To my mind a ruined castle is a load of ruins. Stuff to see; exhibits and information. *Not* two rather small piles of rubble behind barbed wire fences. It was crap.
But we had a rather pleasant walk up the Thames (and back) whilst we were in the area.

We had planned to have dinner in Wallingford, but for all that the place was rather posh (it had a Waitrose!) most of the pubs looked like the sort of places that lager louts go to for a fight. So instead we drove out to a village called Brightwell cum Sotwell and parked up by the Red Lion. It was closed. But the sign on the door said they would open in an hour’s time, so we went for a little walk round the nearby countryside before coming back for a rather good bit of dinner. And three ales I’d not had before.

I’d taken a few photos whilst we were out. Once back at out hotel chalet I eventually managed to upload them; the wi-fi wasn’t quite as well behaved as it might have been. Or perhaps it was the chocolate porter (6.5% ABV) that was to blame…

Did I mention that today was my thirtieth wedding anniversary ?