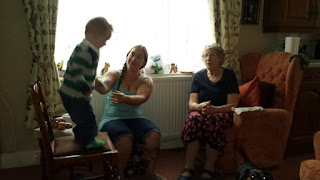 After a surprisingly long time spent asleep I watched an episode of “South Park” over brekkie. Randy was being laughed at by all and sundry because he’d bought a branch of the once-popular video store “Blockbusters”. For all that I sniggered it made me think. Hiring videos was all the rage once.

It is getting a little bit tiresome now… Sill on the plus side I see that “Yonderland”’s third season is starting soon.

"er indoors TM" set off to work. "Furry Face TM" and I drove round to collect "Daddy’s Little Angel TM" and "Stormageddon - Bringer of Destruction TM", and we went down to Hastings to visit my Mum and Dad. They like seeing the littlun. I’m not sure why, he comprehensively destroyed everything he could, and had a very good go at that which he either couldn’t or was stopped from destroying. Mum and Dad seemed well; they fed us to bursting with coffee and cakes. The plan had originally to come home via McDonalds, but I was too stuffed for that.

We got home shortly after mid-day, and as is so often the case before the night shift I was really tired, so I went to bed for the afternoon. Sleep would have been nice but between the phone ringing and my dog woofing it was a rather noisy afternoon. I dozed off and on, and finally gave up and sat through this week’s second episode of “Game of Thrones” before setting off for the night shift.

I’d rather have stayed at home though…