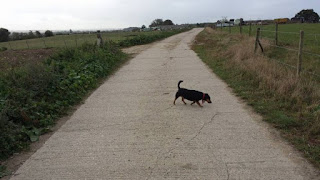 I slept like a log, but woke with a rather painful elbow. What on Earth could have set off my tennis elbow whilst I was fast asleep?
Over brekkie I had a look-see on-line (as I do). Not much had happened on Facebook for once. I had an email from Amazon which made me wonder what that company is playing at. For a successful world-wide business selling pretty much everything, their I.T. leaves a lot to be desired. Not only do they try to sell me stuff I’ve already bought from them, they are now asking me to review e-books that I have already reviewed on their site.

I popped the lead onto "Furry Face TM" and we went for a little walk. "Daddy’s Little Angel TM" had a better offer today, so instead I took my little dog out to Great Chart where we walked along my geo-series for a couple of miles. I'd h’d reports that two geocaches I’d put out there were missing so we went to have a look. Sure enough they were missing, so I replaced them.
Great chart is a good place for a walk. My Patagonian Tripe-Hound was off the lead for over a mile without getting into mischief, we saw a wren and a buzzard, we had a good walk.

Once home I fixed the washing line. "er indoors TM" had broken it a little while ago. And with the washing line fixed I hung out washing. I then trimmed back more of the jungle which pours over the fence from next door. I really should have a word with him about his fixation on roses and clematis, but in all honesty I’m not sure he wouldn’t physically attack me if I did.
With more washing put on the line I then had a look at the monthly accounts. Oh dear… I have had a small pay rise and the mortgage payments have gone down by a pound each month. And there’s no denying that the finances are *far* better than they were a couple of years ago. But they are still a lot worse than they were a couple of years before that. Perhaps Is should start actively job-hunting again?

Over lunch I watched an episode of “Game of Thrones”. My SkyPlus box is odd. When I watch “South Park” it makes me type in a secret code before it plays the show. It feels that an animated show with all the swearing bleeped out shouldn’t be watched by just anyone. However it makes no such restrictions when I want to watch “Game of Thrones” which is in many ways little more than a pornographic bloodbath.
As I watched nudey-dragon-girl incinerating her victim I polished up my walking boots. They positively gleam now.
I then watched “Poldark” – another series which I am sure would be better if I knew what was going on, and with the tumble drier having done its best with my smalls I then folded up my undercrackers whilst watching “Upstairs Downstairs”.

"er indoors TM" came home and boiled up a rather good bit of dinner, and once she’s gone bowling I did a bit of sewing before programming “Hannah” for tomorrow.
For all that I need a job that pays more, I like having a job which gives me so much free time…