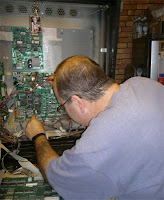 I really felt as though I couldn't be bothered to get out of my pit this morning, but eventually I hauled my carcass into action. With "er indoors TM" off to Folkestone to get her car doors fixed, I went up to town with Martin. First of all to the cheapo shop (what in better days was once Woolworths). I like the cheapo shop - everything costs ninety-nine pence, so I stocked up with several requisites. And then on to the market stall for some fruit and veg. Only to find that the stall wasn't there today. That was a nuisance: five apples and five carrots from the market stall are half the price that I pay in a supermarket.
And then another disaster - Martin gave me a jelly sweetie, and it took out half of a tooth. I shall have to get that fixed in the week.

And then we went round to Chris's for the afternoon. We'd volunteered to help out. Having sold a pinball table (Chris has four pinball tables in his house) he needed a bit of help to move the thing. The table which had been sold was upstairs, and so we needed to disassemble it, lug the bits downstairs, reassemble it (to prove to the buyer that it worked), lug the sold table to the buyer's car, disassemble one of the downstairs pinball tables, lug the bits upstairs and reassemble it. And then generally tidy up.
It all sounds fairly easy in theory - in principle it was (mostly). We soon found that a grandfather clock was seriously in the way, so we had a minor delay whilst we disassembled the clock and moved the bits. Moving the pinball tables was easy enough - albeit a bit heavy. Reassembling the table to be sold was easy enough - the wiring was labelled as to what wire went into what plug, and buyer arrived on time and was happy with what he saw. Four of us wrestled the table into his car, and sent him on his way (back to Brighton). I did wonder how he was going to unload the table when he got it home, but (to be blunt) that wasn't my problem.
Reassembling the table we'd taken upstairs wasn't so easy: the wiring wasn't labelled at all, and the instruction book only mentioned about half the cables. After an hour or so we gave up and spent an hour of so rebuilding the grandfather clock. Or that is we spent five minutes rebuilding the clock, and an hour getting the thing level. And then Chris ordered pizza. Good move.

With the house tidied, the clans gathered and we had the now standard Saturday night film night. First of all we watched "Limitless" - a very watch-able film following what happens when one takes a drug which gives super-intelligence. I liked that one. The second film, "Inception" featured Leonardo DiCaprio as a character who had the ability to interact with people's dreams. An interesting concept, but the film had far too much which was unexplained; not least of which was who were all the people going round with Leonardo DiCaprio's character. But it's always good to watch a film with friends....
We came home leaving Chris to finish off wiring up the pinball table. I wonder how he's getting on...