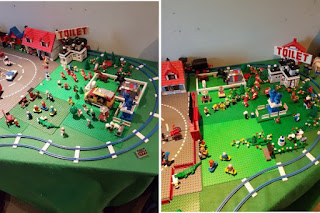 I slept for ten hours last night. That was rather impressive. It was with something of a shock when I saw the clock as I woke. I leapt up to see to Sid, but too late… there were turds on the lino. I chivvied him into the garden where he did a rather impressive tiddle though.

As I scoffed toast I had a look-see at the Internet. This morning I seemed to be bombarded with loads of adverts for an app which would set me walking targets for weight-loss purposes. I told them all to get knotted. I take the dogs on very regular walks. A small walk is over a mile. A circuit of the park or of the woods is two miles. Weekend walks are five to seven miles. And still the weight piles on.

Every morning has a petty squabble; today’s was on the Facebook group “Dad Jokes England”. Usually it is the home of rather corny jokes, but this morning a row was kicking off for the most trivial of reasons. It never fails to amaze me how there are some people who will argue over whether the sky is blue or whether grass is green.

I also saw I had a message from “Ermenegilda Irene” who was trying to direct me to dubious websites. I was having none of it.

And needless to say there was absolutely nothing from the power company or from Limakshi despite her assurances of sending me an email yesterday.

We did have one or two plans for the day… all of them had gone west for various reasons. So with "er indoors TM" having her brekkie I went up to the attic room and spent a little while in Lego World. The far end of my Lego town was always supposed to be a park, but it was something of a shambles so today I took it all apart and had a major re-vamp. I’ve retained the Bill & Ted statue from San Demus, Darth Vader’s riding school and Viz Magazine’s Drunken Bakers, but having re-arranged and having put in some flower beds the area seems to have a tad more structure to it now. I made a little video too.

According to the weather forecast there was supposed to be a break in the weather between one and three o’clock, so that was when we took the dogs out. We went up to the railway station where "er indoors TM" caught a bouncer (it’s a Munzee thing) and we went on to the park. The dogs were (mostly) well-behaved; on the two occasions when they were being bothersome to the normal people, a quick blast on the whistle had them quickly at my side Even though I say it myself, when the whistle training trick works it is quite impressive to behold. Mind you when it doesn’t, it can be something of an embarrassment.

When we were at the part of the walk that had us furthest from home the heavens opened. We hurried homewards, but with the best will in the world it takes a while to walk a mile. And when the rain had soaked through to my pants was when the hailstorm hit.

We got home, and with pants wrung out we watched a few episodes of “Four in a Bed” in which four different Bed and Breakfast establishments tried to out-do each other. I was particularly interested to watch this batch of episodes as one of the contestants was “The Ship” in Dymchurch. I’ve driven past the place several times but have never been in there. Once lockdown is over maybe we shall visit…

I was also rather amazed to see that two of the four contestants in this afternoon’s Bed and Breakfast competition didn’t actually offer breakfast. One had a “cook it yourself” arrangement, and one sent customers down the road to the nearby café. What was that all about?

I’m not feeling on top form… I might have an early night…
Posted by Manky Badger at 9:16 pm