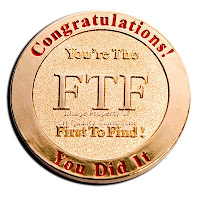 I was up a little earlier than I might have been today. I was expecting a visit from the most recent fruit of my loin, but she had other fish to fry. Which was a shame. Seeing I was up and raring to go I got a lift to town from my beloved. I needed some fruit for lunch in the week and have decided to stick with Tesco. In theory the farm shop sounds a better idea, but over the last few months I’m afraid that the quality of stuff in the farm shop leaves a lot to be desired.
I also got some cheap sandwich boxes (from the pound shop) to use as geocaches on a series I plan to plant out over the next few weeks. They’ve gone up in price – once three for a quid, now I only get two for a quid.

Home – where I did more homework. And checked my emails. I saw that Friday’s blog received a comment. Was I unfair to whinge about the amount of dog turds that I found whilst out geocaching the other day? I think I was fair in what I wrote. I didn’t actually say where the cache was, or which one it was, so I’m not putting anyone off. And geocaching amongst the dog turds in the mud was quite a memorable experience. What’s a diary for if not to record such memories?
Mind you I welcome comment. It shows (if nothing else) that I’m not just shouting into the ether. And it makes me revisit how and what I write. I may (just occasionally) be rather opinionated in my rantings, but I do try to be reasonable and fair in my rantings.

Henry from UK cyber club phoned. He wanted to speak to the cable or satellite TV subscriber. He had to settle for speaking with me. Did I know that after an initial subscription period had passed I would be responsible for any repairs that might be required on my Sky-Plus box? I did know, but I wasn’t going to tell him that. I have this theory that if I’m not too busy myself then by wasting his time I’m actually doing a public service. All the time I am stringing these people along they are not bothering anyone else.
So I told him that insuring the box is a waste of money. I told him that if and when it breaks I shall tell Sky TV to fix it for free or I will take my money to Virgin media. This clearly went beyond the limitations of his script, and rather flummoxed him. Which was probably for the best.

Furry Face needed a walk, and I knew where I wanted to take him. On Friday I’d looked at the map of local geocaches and seen that I’d found all but three of the two hundred and twelve that were within three miles of my house. On Friday afternoon I tried for two of them and got one. So today I thought I’d try for the one I didn’t go for last Friday.
I got the pestilential pup collared and leaded and we went off on our walk. I went the scenic way through the warren, and soon we were within striking distance of the cache we sought: “Around the Tees #1”.
With a bit of scrubbling about in the undergrowth I eventually found that cache, and we carried on with our walk. The plan was a circuit of the golf course and then home. We hadn’t got more than a hundred yards when my phone shouted that I had email. I couldn’t believe the messages – five new caches had gone live – three within a few hundred yards of where we were at that time. Amazingly from the map it looked like we’d walked straight past two of them on our way to where we were when we got this message, and a third new cache was directly ahead of us. So we carried on the route we were walking anyway and soon found the first of the new caches. “Around the Tees #4” was found for the first time by me and my Patagonian Tripe Hound at 1.50pm – an amazing nine minutes after it had been published.
We pushed on - “Around the Tees #3” was a cache we had walked past less than an hour previously, and after a very brief search me and Furry Face had another FTF at 1.55pm – fourteen minutes after publication this time.
Feeling particularly smug we followed our geocompass along a path we’d already walked once in the last hour as we made our way to “Around the Tees #2”. Was it too much to hope for three FTFs? Yes – it was. As we approached the cache we saw a familiar face was already there. “The Hurks” had also been caching in the general vicinity and, like us, had made the most of the opportunity.
I left home intending to give my dog a bit of a run, and possibly find a cache. I found four, had two FTFs, and got the dog exercised too. I was rather pleased about that.

I then came home and looked at disguising my sandwich boxes to turn them into geocaches. I don’t like the current fad of covering them in camouflage tape. I can’t explain why; I just don’t. I know a tame painter and decorator who told me that a dark gloss paint would do the trick. So having confirmed my theory about painting the insides of the boxes to make them more hidden in the shadows, I tried to find some dark paint. If any of my loyal readers have any dark gloss they don’t want…